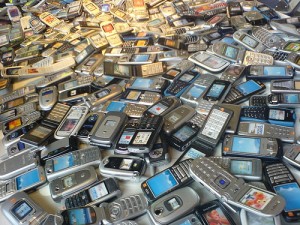 “There are currently about 3.2 billion mobile subscribers in the world, and that number is expected to grow by at least a billion in the next few years. Today, mobile phones are more prevalent than cars (about 800 million registered vehicles in the world) and credit cards (only 1.4 billion of those). While it took 100 years for land-line phones to spread to more than 80% of the countries in the world, their wireless descendants did it in 16. … and fewer teens are wearing watches now because they use their phones to tell time instead. So it’s safe to say that the mobile phone may be the most prolific consumer product ever invented” — Eric Schmidt, CEO of Google

If you scanned over the above quote, go back and read it at least two more times slowly to allow the stats and concepts to sink in.

Aren’t they staggering? What other industry do you know that’ll grow by an estimated billion within the next few years? How about market penetration? Do you know of any product, service, or company for that matter that has penetrated 80% of the countries in the world within 16 years? I can’t think of one outside of the mobile industry.

But, for chiropractors, this is GREAT news! As inbound marketing continues to erode the foundation of traditional marketing, the playing field has been leveled. In other words, you no longer need a hefty marketing budget to compete with the big boys.

For starters and pennies on the dollar, chiropractors can launch a correctly optimized, self-hosted blog, write incredibly relevant content for their niche, link it to the top social media networks in order to aggregate it to millions in order to drive traffic to their sites, then rinse and repeat.

Unfortunately, though, the work doesn’t stop there. Chiropractors need to start thinking mobile for local results. Let me put it another way — to be effective in local marketing, you must fuse web, mobile, and offline ad campaigns synergistically for maximum ROI.

Take a look at the following chart: 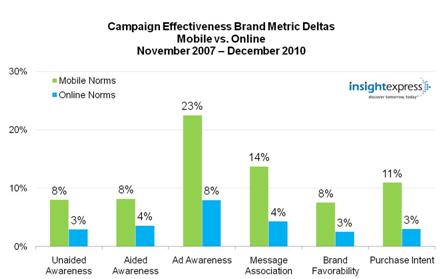 The above data doesn’t beat around the bush. Mobile ad campaigns consistently outperformed online ad campaigns in the above six categories studied.

In addition, don’t discredit standard feature phones over more popular smart phones. Mobile ad campaigns are working nicely on them as well. Take a look at the following chart: 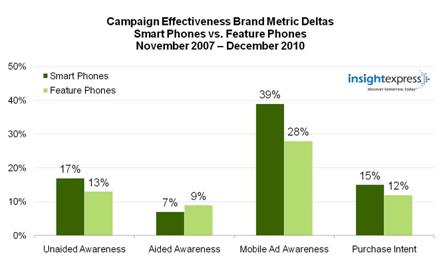 Yes, smart phones are leading the way but there’s still plenty of people who haven’t made the jump. Consequently, you need to target your marketing campaigns toward both platforms.

In closing, if you’re looking for a way to connect local prospects with your brick and mortar chiropractic practice, you must start thinking mobile.

Question: How strong is your web presence? Have you laid the foundation so that you can benefit from mobile marketing?

Let us know your thoughts by leaving a comment in the {comments} section below.