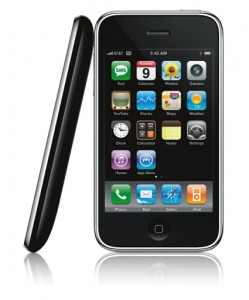 Tomorrow, June 19, is the release date of Apple’s third generation iPhone, the iPhone 3GS. Being an early-adopter, you can bet your last dollar that I’ll have one in my hands tomorrow by sun down.

Having owned an iPhone since its inception, I’ve had plenty of time to explore its strengths and weaknesses.

One of its greatest features is the ability to download, install and use various third-party applications. However, with so many offered now through Apple’s App Store, it’s becoming increasingly difficult to choose which ones provide the best value regardless if they are free or not.

In today’s post, I’d like to share with you several applications that you can use to quickly update your social media accounts while on-the-go or between patients. They’ll make your time much more productive while simultaneously allowing you to promote your practice.

But, before we dive into today’s topic, allow me to digress.

Apple’s technology is unsurpassed. Call me biased but when it comes to details, they cover all the bases.

Nothing can be further from the truth than their incessant bent toward perfection with each subsequent iPhone upgrade. As their engineers hone in on what consumers really want, Apple steps closer to eliminating traditional computing with the iPhone.

Perception is reality and that reality can be witnessed in public everyday. iPhones are being used everywhere for all sorts of things. All because Steve Jobs envisioned a device that could be used outside the confinement of a desktop computer or even a laptop.

So, as each new generation rolls down the conveyor belt of innovation, you can be assured that Apple will push the envelope of technology so that our lives will be enriched and their bank accounts will be filled.

Consequently, as a true Apple diehard, I’ll admit to being one of the first to empty my pockets for their new products. 🙂

Now, where were we?

“Vlingo lets you control your mobile phone with the power of voice. With Vlingo, you can simply speak to your phone to send a text or email message, call a friend, search the mobile web, update your social status, and more.”

Did you catch that?

You can even update your social status simply by speaking into your phone.

Vlingo For iPhone Demo on Howcast

Now, before you get too excited, vlingo currently only offers social media updates through Facebook and Twitter.

So, you won’t be able to update four of the suggested six social media sites through their Social icon unless you get even more creative through text and email messaging. Just make sure you’ve setup those accounts to receive status updates via those more antiquated methods.

If you don’t want to mess with vlingo and the possible embarrassment of speaking your thoughts out loud in an office full of patients, you may prefer Pingle. It’s the way to go when you want to type your message and have it dispersed through your Ping.fm account.

Once you create and setup an account through Ping.fm, you can easily update ALL of your social media accounts at once through Pingle’s easy-to-use iPhone app. Just download it from Apple’s App Store, enter your email address and password and start updating immediately.

With the iPhone 3GS’s new video capabilities, you can easily record and edit patient testimonials on-the-fly and then upload them to your YouTube account. No need to lug around a camcorder, deal with the hassle of importing the video footage into your computer or wait to upload it once imported. The iPhone 3GS can handle it all.

Now, I realize that there are much more powerful video editing tools and software available. Nevertheless, there’s something about authenticity and capturing life as it happens. People like to watch things as they unfold. Trying to go back to edit the testimonials can actually work against you. Leave the professional editing for your promotional videos and allow the true thoughts, expressions and praises from your patients to be recorded as is.

You know my stand on WordPress. It wins hands down as the best blogging software available today. So, if you’ve launched a blog with WordPress for your chiropractic practice, then you should be consistently generating content for both your prospects and patients.

A great way to stay ahead of the curve is by using the WordPress app. It’s robust but simple to use. You can create and edit content offline and then upload the post once its completed.

Also, another benefit is the ability to update and manage multiple blogs straight from the app. You just add each blog’s URL, username and password. The app will then ping the server it’s hosted on and download the content onto your iPhone.

For a more detailed explanation of its features, watch the following video:

There really isn’t any excuse for not being able to produce content for your blog on a consistent manner. It’s just a matter of commitment and time management.

For example, some of my most productive times happen when my wife goes shopping. She likes me to go with her but mainly so that I can chauffeur her around. When she’s in the store, I find a comfortable place, pull out my iPhone, fire up the WordPress app and start composing a new blog post. If I’m on a roll, I can even post it before she’s done.

Like the company states, “Evernote turns the iPhone and Ipod Touch into an extension of your brain.”

I couldn’t live without Evernote. It is one of the most innovative apps out there. It literally captures whatever you throw at it.

For example, let’s say you’re reading an incredible blog post through your Google app Reader. With so many nuggets of information flying through your retina, you’d like an easy way to capture them without having to resort to paper and pen. With Evernote, now you can.

Simply capture, tag and sync. Once completed, it’s hosted “in the cloud” which can later be pulled down by your desktop computer, web browser or any other device you designate through your account.

The possibilities are endless. You can capture photos of patients, tag them by their names and later search for them to be used in a patient of the month newsletter.

Or, you can capture their audio testimonials and later use them on your website as promotional material for your services.

And, since you’re using “the cloud”, it doesn’t matter where you are. You can access the data as long as you have a connection to their server.

For a more detailed explanation, watch the following video:

As you can see, the sky’s the limit!

Remember what Stephen Covey once said, “Technology is a wonderful slave but a horrible master.”

If you devote the time, you can learn to use technology to streamline your life. With the new iPhone 3GS, Apple’s App Store and the ingenious creative abilities of third-party developers, you have no excuse to be able to promote your practice efficiently and successfully.