“Social media sites are tools to be used.
Blogs and websites are assets to be owned and grown.”
Brian Clark of CopyBlogger 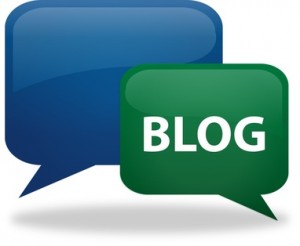 Now that I’ve laid a foundation to build upon, let’s start delving into why chiropractic blogs should be chiropractors’ new patient internet marketing tool of choice.

But, before we get started, let me remind you that this is a series of blog posts that will run through the entire month of April. The reason why I broke the topic into a series is because the answers require more elaboration than one blog post can handle.

So, by the time you finish the series, you should have a nice resource to come back to as you move more aggressively into inbound marketing.

With that said, I want you to focus intently on the opening quote of this post.

Brain Clark, founder of CopyBlogger, stated this on Twitter awhile back which, through two sentences, captures the essence of inbound marketing.

Social media sites are tools to be used.

Without a doubt, social media sites are extremely important.

For example, outside of organic search referrals through top search engines like Google and Bing, social media sites provide Next Generation Chiropractor with more referrals than any other source.

And, this is exactly how it should be.

By checking website rankings through Alexa, you’ll see that social media sites show up as some of the top websites in the world.

Fortunately, this process is made easier by social media networks and third-party software developers through their creative APIs and other innovative technologies.

Through a series of keystrokes and mouse clicks, you can join conversations on just about any subject imaginable from around the world.

But, just because you show up for the party doesn’t mean you’ll generate business let alone obtain leads.

You must have relevant, valuable information to point people to in the form of valuable content.

As the conversation unfolds, if you don’t have somewhere to lead people to, then from a business standpoint, what’s the point of social media networking?

Remember, it’s your content stored on a chiropractic blog that connects the relationships.

One caveat in regards to providing information:

People don’t seek information for knowledge but rather for the benefits that that knowledge will provide them. So, make sure you’re laser-focused on valuable content that provides knowledge with benefits.

Blogs are assets to be owned and grown.

As I’ve stated from the beginning, blogs are designed to be the hub of all your online activity.

I designed the following image to drive home my point. 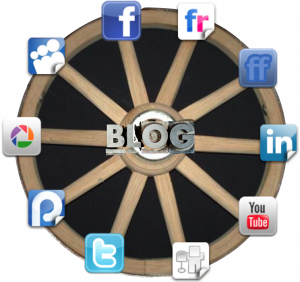 So, you need to see your chiropractic blog as an asset.

Does it take time to build this asset?

Of course! But doesn’t anything of value take time to produce?

If you’ll change your thinking and start viewing your chiropractic blog as an asset instead of some measly website parked in the dark corners of the world wide web, you’ll understand and appreciate the power that you possess to become a worldwide content producer.

Literally through a chiropractic blog you have the capabilities of reaching thousands, if not millions, of potential people!

What other platform can you think of that offers these capabilities at pennies on the dollar?

My guess is none!

So, how does one build this asset?

You see, as Mitch Joel so eloquently wrote in Six Pixels of Separation

But, the more frequently you publish, the bigger your online footprint becomes allowing you to reap the benefits of slow sooner than later.

As your footprint continues to grow, you’ll enjoy the benefits Chris Anderson mentions in his book, The Long Tail

In a future post within this series, I’ll elaborate on this even greater supported by well-documented research.

Let me know by leaving your answers to these questions in the {comments} section below.